More and more, percolators are being used in bongs to create diffusion. The function of a perc is to break down the smoke and filter it through the percolating water. This cools the smoke and will make the hit smoother.
They all break down the smoke (or vapor) and filter it through bubbling water in order to give the smoke a cooler, more smooth taste. To get a better idea of what you’re walking into, take a look at our guide to the different kinds of percolators. 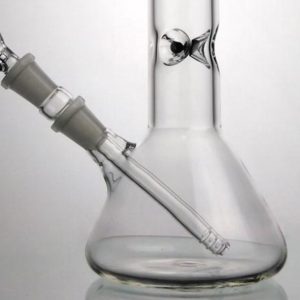 This is the simplest type of percolator, a vertical downstem with slits at its base that sit under the water and allow the smoke to flow through it. It’s not a complicated design but it does the basic job of cooling the smoke. They can either be fixed or removable. 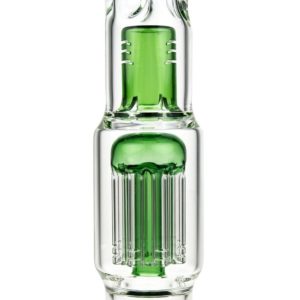 Tree percolators group a number of thin vertical tubes or “arms” with filtering slits together. Naturally, the more arms, the more smoke is filtered. 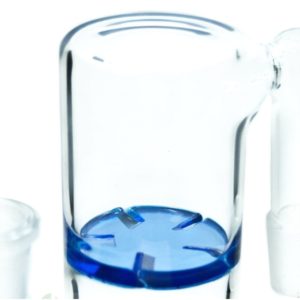 Turbine percs are angled slits that sit around the main chamber and create a whirlpool with the water that extends into the next chamber, cooling and diffusing the smoke. 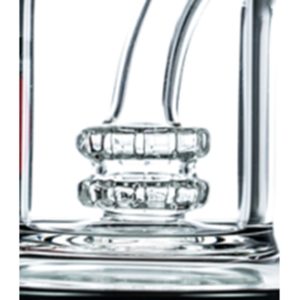 Disc percs create a ton of bubbles, each diffusing your smoke. The tiny holes can get clogged and might be hard for beginners to pull through but the amount of filtration is worth it. 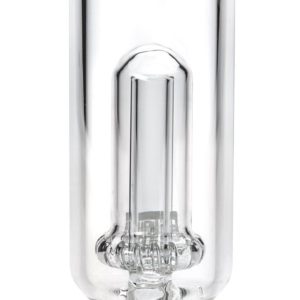 Circ percs are very similar to disc percs but usually have slits only around the outside. They can often be found at the end of a downstem and come in different styles such as domed, connected to a j hook, or stacked on top of one another. 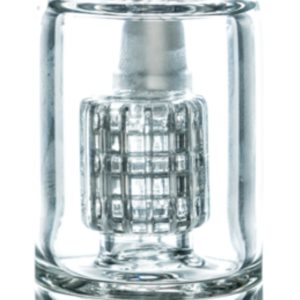 Barrel percs have a straight cylindrical design with gridded notches that make them look like a barrel. They allow for greater diffusion and have more holes than a typical perc. While usually upright, the barrels are occasionally turned sideways in rigs and bongs that connect the perc directly to the downstem. 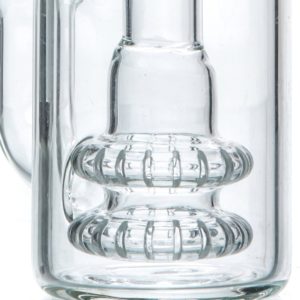 Showerhead percs are a hybrid design between a barrel perc and a turbine disc perc. This design works to push smoke through a bunch of tiny holes while also reducing drag. 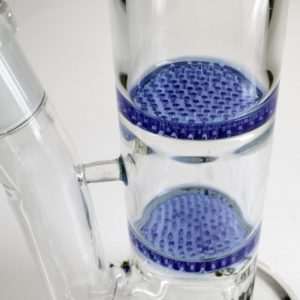 Honeycomb percs are a type of disc perc. They are completely flat and connect one chamber to another. Honeycomb percs have a series of small holes and sit parallel to the base, shooting the bubbles straight up and into whatever sits on top of it. Many water pipes feature multiple levels of honeycomb percs. 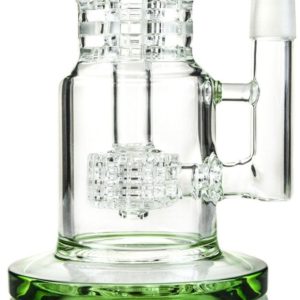 Ratchet percs have holes around the perimeter of a disc. This leaves space at the center for a downstem to pass through the filter, making it an ideal design for small water pipes like bubblers and dab rigs. 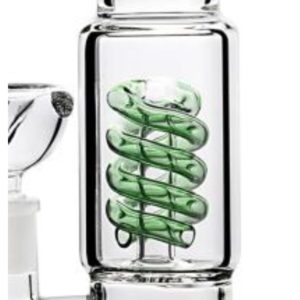 The perc coil is an intricate glass coil with two openings at the bottom. Some coils contain glycerin which can be frozen for cooler hits. 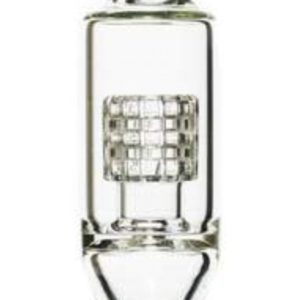 Matrix percs come in all sorts of designs, but essentially they combine the cylindrical shape of a disc perc with the slits and holes of a barrel perc. Stereo matrix percs are simply two matrix percs stacked on one another, either directly or separated by a glass disc or downstem. The slits on a matrix perc can vary in direction, size, and number. 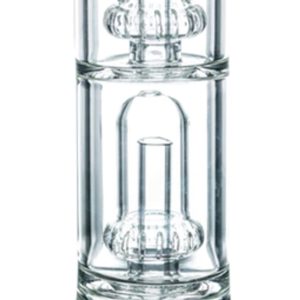 UFO percs, which are popular for their efficiency and how easy they are to clean, build on the older dome perc design by placing a downstem upwards within a glass bubble that has matrix perc-like slits around its base. The flared base gives this kind of filter a larger space for diffusion to occur. 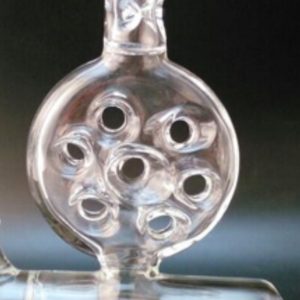 Swiss percs are named for the cheese-like holes in the body of the water pipe. Airflow is forced around the holes to help reduce drag and break down smoke. Doughnut Percs and Fab Egg styles are two types of Swiss Percs. 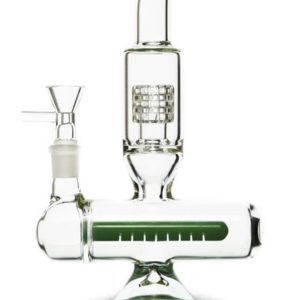 Inline percs extend the downstem joint directly into the water chamber. The perc is essentially a long glass stem with holes or slits which divert the water downwards. 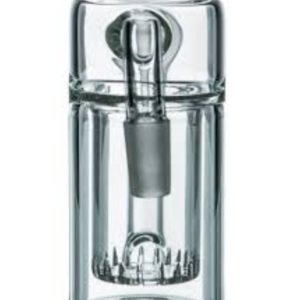 Inset percs are contained inside the chamber of the water pipe and are usually in the shape of an indented cup that creates a pocket. This extra pocket works like another chamber and will have some kind of slits to diffuse your smoke as it enters. 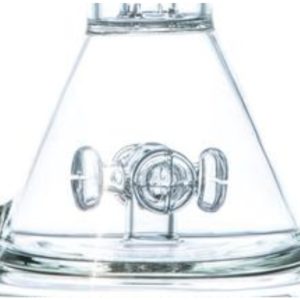 Cross percs take a downstem filtration system and combine it with a series of cross-shaped tubes branching off the center and diverting the smoke and water sideways and away from the center of the bong to encourage airflow and avoid splashback. 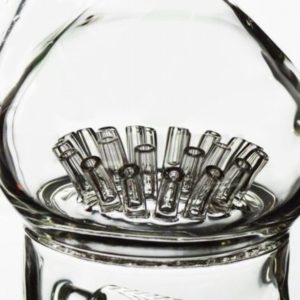 Sprinkler percs are similar to tree percs. Multiple arms extend upwards each with a hole at the end.

A ball perc is a combination of a turbine and a ufo with slits running around the outside. 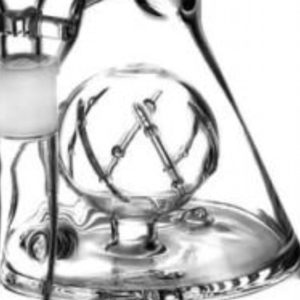 A ball perc is a combination of a turbine and a ufo with slits running around the outside.